MGG turf and soil scientists discuss the most 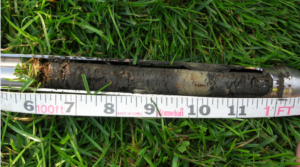 This fall our soil and turf scientists Vytas Pabedinskas, of Save our Soil, LLC, and Alec McClennan, of Good Nature Organic Lawn Care, visited the pilot fields for our natural lawn care technical assistance program.  They conducted soil tests at each of the four fields of (1) City of Elgin, IL’s Lords Park, (2) River Forest Park District, IL’s Keystone Park and (3) City of Grand Rapids, MI’s Sixth Street and Canal Parks. MGG and LawnandLand.org have already addressed the importance of soil testing at bit.ly/MGGtesting and bit.ly/LLFsoiltesting.  However, we wanted to hear from our scientists about how this practice contributes critical information to our work to eliminate synthetic pesticides and fertilizers on these sites. See below for their answers.

Why are soil tests essential to our natural lawn care technical assistance program?

Vytas Pabedinskas: Soil tests give you a view of how your soil actually functions.  Many times managers and homeowners are simply working off assumptions or routines.  Instructions on fertilizers treat all soils as equals and the conditions of all soils as similar, irrespective of climate or management practices.  At best it’s a guess and over time the guessing can make conditions in soils worse.

Alec McClennan: Healthy soil is the foundation for healthy turf that is able to look attractive and be grown without potentially harmful pesticides. The healthier the turf is, the fewer issues it will have and healthy turf starts with healthy soil.

What data points from the soil tests do you pay the most attention to?

Pabedinksas: There are three features of soils to look at: chemical,  physical, and biological.  Chemical analysis gives clues to whether nutrients are in balance and where there may be actual deficiencies. 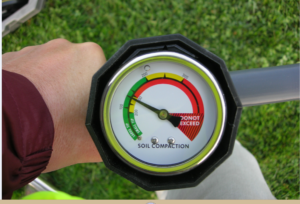 Physical analysis examines bulk density, soil compaction, and soil texture (the make up of the soil’s components: sand, silt, clay).  Healthy soils have ample pores that allow for the travel of water, exchange of gases, and the growth of roots, and that would be indicated by a low bulk density and little soil compaction.  Heavy use like on a sports field squeezes away the pores, stressing plants which thin and allow weeds to sneak in. Low porosity prevents water absorption that causes ponds on the surface that damage playing conditions.

The texture gives clues to how to manage the soil.  Very difficult to change, steps can be taken to work with soil texture, either through physical manipulation like aeration, where cores are punched and removed to improve bulk density, or through the addition of organic matter which helps holds particles together to keep pores open, hold moisture and nutrients.  Over fertilization can cause soils to lose all structure as clay particles disperse and organic matter degrade.

Biological conditions are tied to organic matter in the soil, something that many managers don’t think to add or avoid due to misinformed habit.  A healthy soil has a robust community of microbes that work with plants to cycle nutrients in the soil.  The organic matter is a food source for the microbes that does need to be replenished every so often.  While lawns produce their own organic matter, things like mowing height can affect how much is produced, and supplementing by adding compost or mulching leaves in the fall can make up for deficiencies.

McClennan: We look at the organic matter, cation exchange capacity, and major nutrient levels – Calcium, Magnesium, Potassium and Sodium as well as Phosphorus.  Looking at the organic matter and cation exchange capacity tells us something about the biological health and composition of the soil.  Knowing the nutrient levels allows us to work to get them into balance with each other.  When they are in proper balance, healthy biology thrives and the soil becomes healthier and more capable of supporting strong turf growth.

When is the best time to conduct soil tests for lawns? 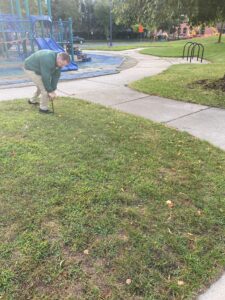 Pabedinskas: Spring and early fall, when conditions aren’t too wet or dry and cool season grass is supposed to be active.  Testing should be performed every three years at the same time of the year. So if you sampled in spring first, always sample in spring. This allows you to properly compare tests to evaluate if current practices improved conditions.

McClennan: The best time of year to take soil samples is early Spring because the soil has a chance to purge all the fertilizers and inputs that were applied to it the previous year. You get a clear picture of what the actual soil looks like with less risk of picking up a fertlizer pellet that skews the results.

Do you have any initial insights from your soil tests conducted at the MGG pilot fields?

Pabedinskas: Visiting the River Forest Park District’s Keystone Park at the early hour of 7 am on a Tuesday morning, I was surprised at the number of people awake and using the park.  There was a constant stream of joggers circling the park, a dozen dog walkers either crossing the open fields or pausing to let their pets chase a few tossed balls and several groups getting in games of tennis and paddle ball at sunrise.  A well-maintained space, a soccer field stretching through the outfields of two opposing baseball/softball diamonds, one can see that the space gets a lot of use.

Upon closer inspection of the soccer field, grass competes with a significant amount of clover.  The ground has a firm feel and some cracks can be seen in a few spots where the turf has thinned, the tell-tale sign of a typical clayey urban soil.  A few extractions with a soil sampler and a few probes with a compaction meter and suspicions are confirmed:  4 inches of fairly compacted soil, sticky with high clay content, on top of an obvious grey band of clay that should be much deeper in the soil profile.

I am very impressed with how well the turf has held up, which can be attributed to the dedication of the staff.  The space has experienced some transformations over the last 15 years:  regrading; changes in field configurations; cement surfaces and baseball stands removed and replaced with turf; old trees removed, space filled in with grass.  With each change, there is less and less soil to work with.  The challenge on such a surface is having enough depth to grow grass.  The protocol provided by Midwest Grows Green would be an excellent way to start rebuilding the soil profile.  This would contribute to a more consistent surface for the sporting activities.  With some adjustments to the schedule to allow for additional core aerations and the application of compost as a top-dressing, I believe the turf will be able to withstand the high amount of traffic and reduce the need for irrigation that counters the cracking caused by the high clay content. 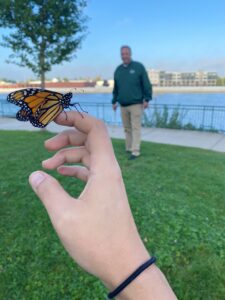 A butterfly pays a visit to McClennan and his team

McClennan: The soils at Grand Rapids’ Sixth Street and Canal parks have good organic matter levels which are a great starting point.  They are higher in magnesium than we would like because excess magnesium can lead to compacted tight soils, but the combination of sufficient organic matter and a relatively low Cation Exchange Capacity indicates that the soils are more sandy than clay in nature and will help keep the excess magnesium from being too much of any issue.  Overall, the soil has good potential!

Want to transition your fields to pesticide-free or organic? Visit our natural lawn care technical assistance homepage and fill out our informational survey at bit.ly/MGGnlcInfoSurvey