This year, our Technical Assistance Program (TAP) had the opportunity to transition a portion of the City of Elgin’s historic Lords Park away from synthetic pesticides and fertilizers. Elgin and MGG selected a northern stand of turfgrass that you can see in Image #1 below. 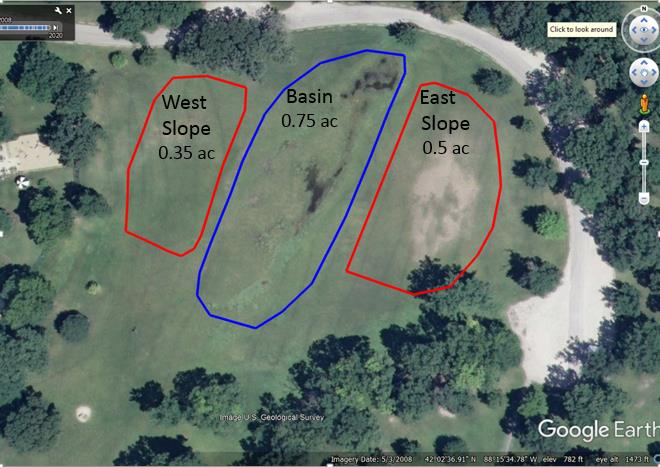 Image #1 Aerial of TAP focus areas. The two red polygons represent the west and east slopes where there are bare, compacted soils. The blue polygon is the Basin where recurring flooding occurs. Total area is approximately 1.6 acres.

The northern section of Lords Park contains a .75 acre basin flanked by slopes on the east and west sides.  These slopes pose multiple challenges to turfgrass growth. First, the soil on the slopes contains many rocks and experiences severe compaction that prevents turfgrass root establishment. This results in bare soil or weed infested areas on the slopes as seen in Images #2 and #3 below. 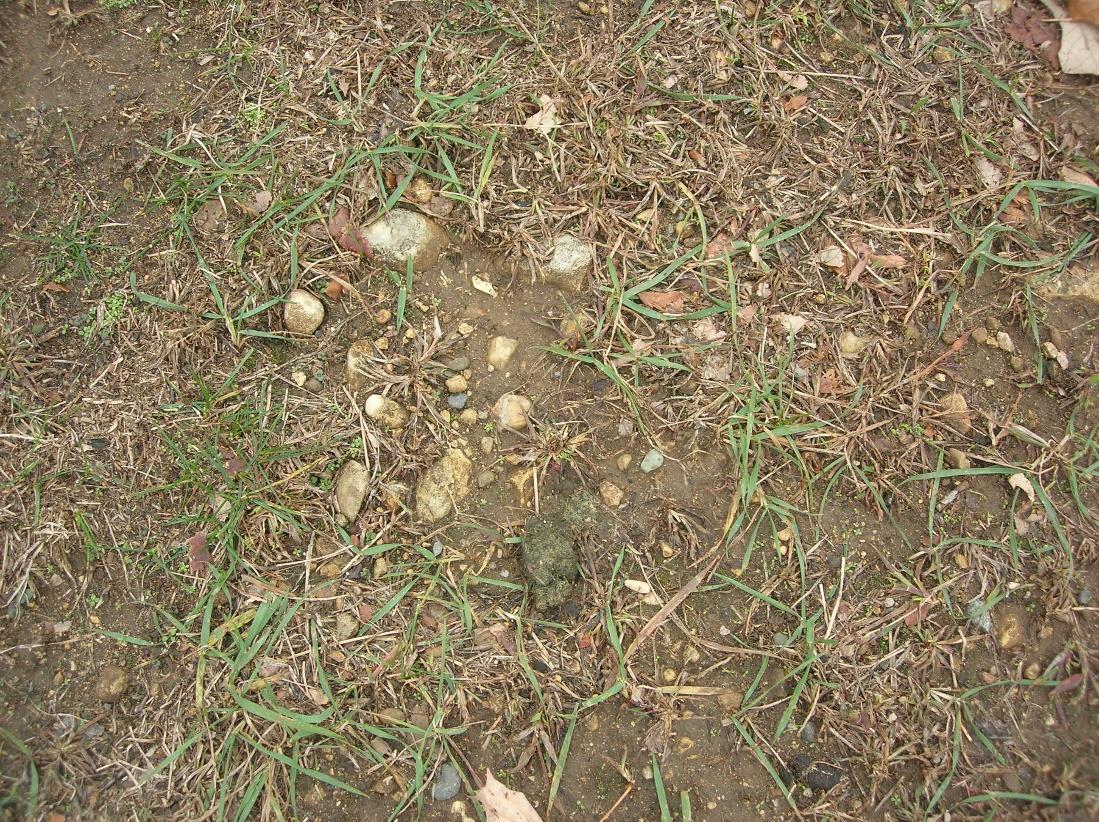 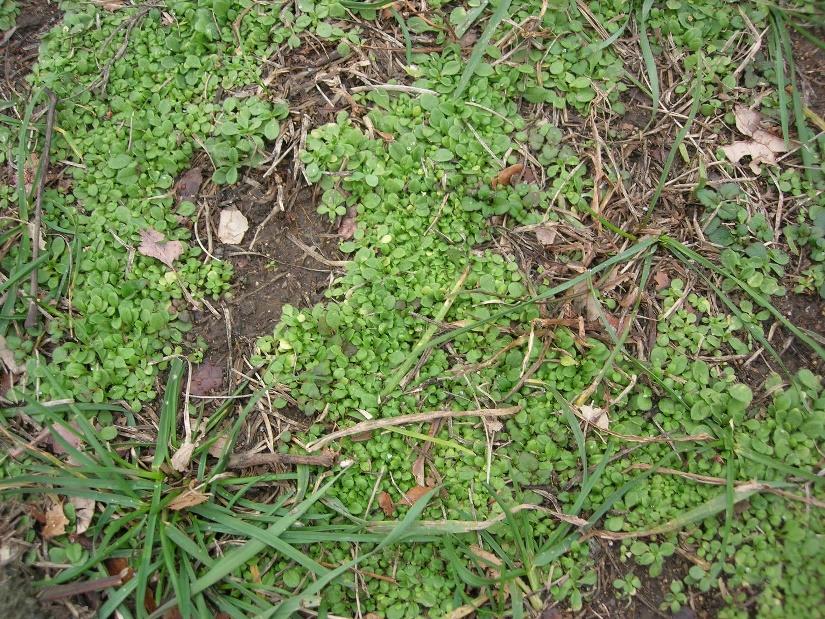 Image #3 Proliferation of weeds on bare and compacted soil of East and West Slopes.

The bare soil on the slopes causes a second problem for turfgrass growth of drainage. The lack of vegetation and soil compaction does not capture water, which immediately runs into the basin.  This water runoff frequently floods the basin as seen in Image #4. Turfgrass grows vigorously in the basin due to the wet conditions, but the flooding can waterlog turfgrass roots risking disease and even drowning. The prolonged standing water in the basin, also, prevents recreational use of the area, produces unpleasant odors and provides breeding grounds for mosquitoes. 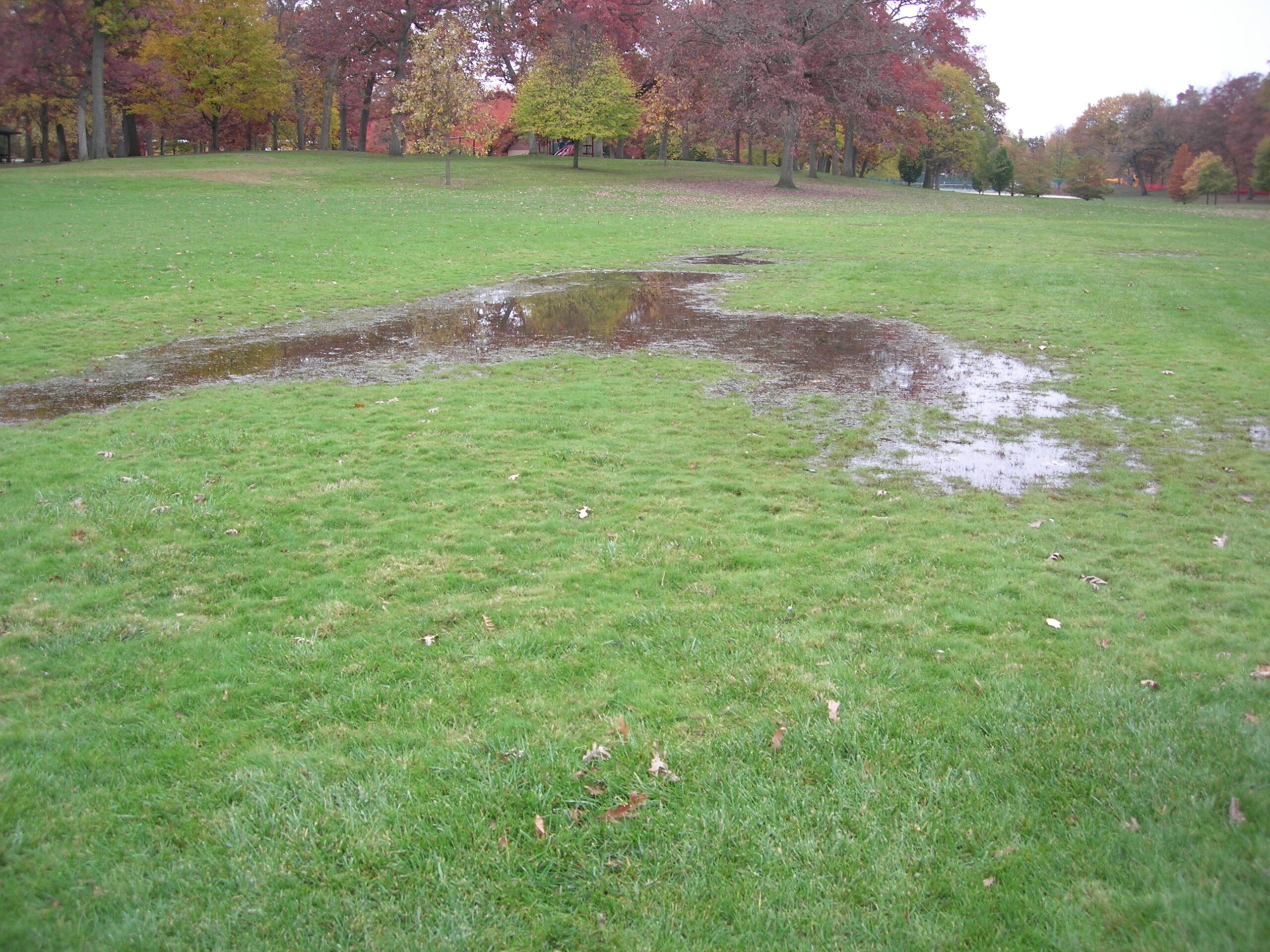 Image #4 Standing water in the basin.

MGG’s TAP prioritized reducing the standing water in the basin by improving the soil conditions and plant health of the slopes through resurfacing with compost topdressing and grass seed. In late August, Elgin ran a landscape rake across the slopes to pull weeds, remove coarse gravel and cobbles and loosen the soil at the surface (See Images #5 and #6). 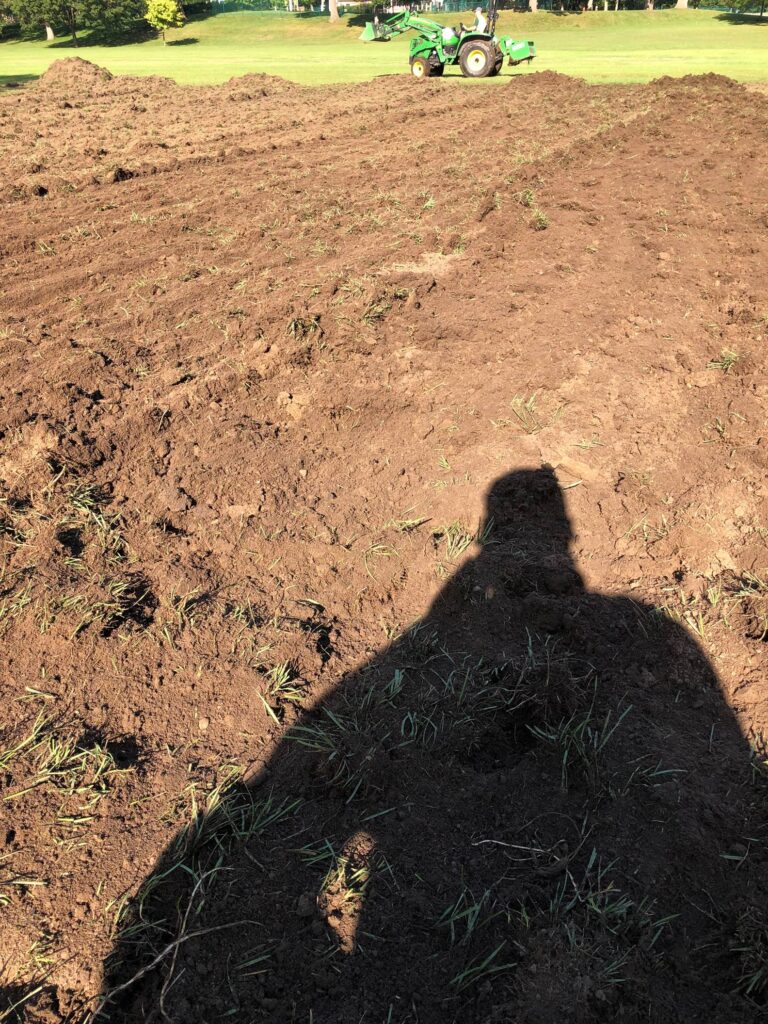 This raking successfully broke through the rocky soil layer creating a soft and porous soil for grass and other desirable vegetation to establish quickly this fall. Next, TAP purchased and applied 120 cubic yards of organic matter-dense compost from Midwest Compost LLC to increase soil porosity and facilitate seed germination this fall (see Images #7-#10). 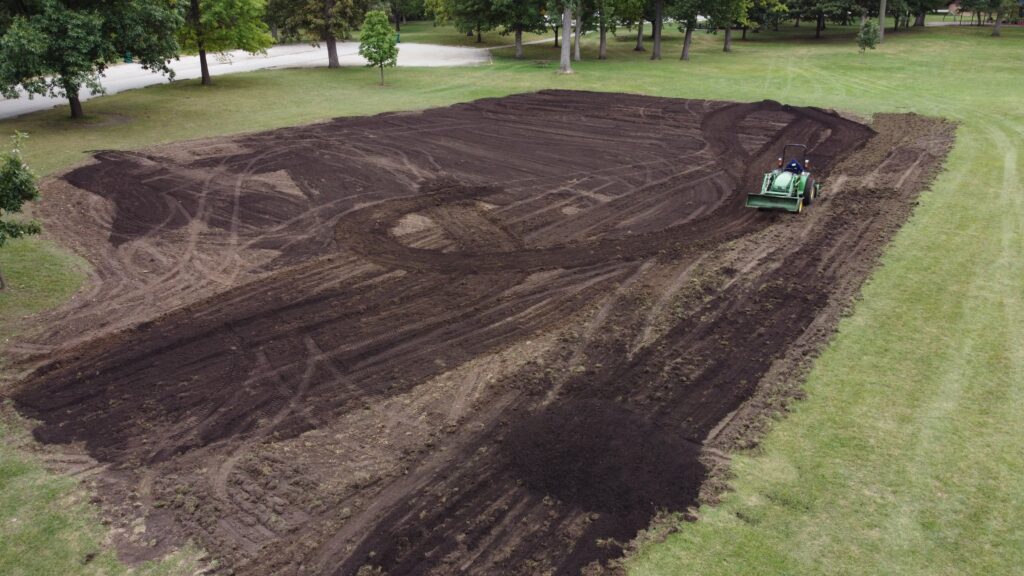 Image #7 Aerial of the compost topdressing applied on the park slopes. 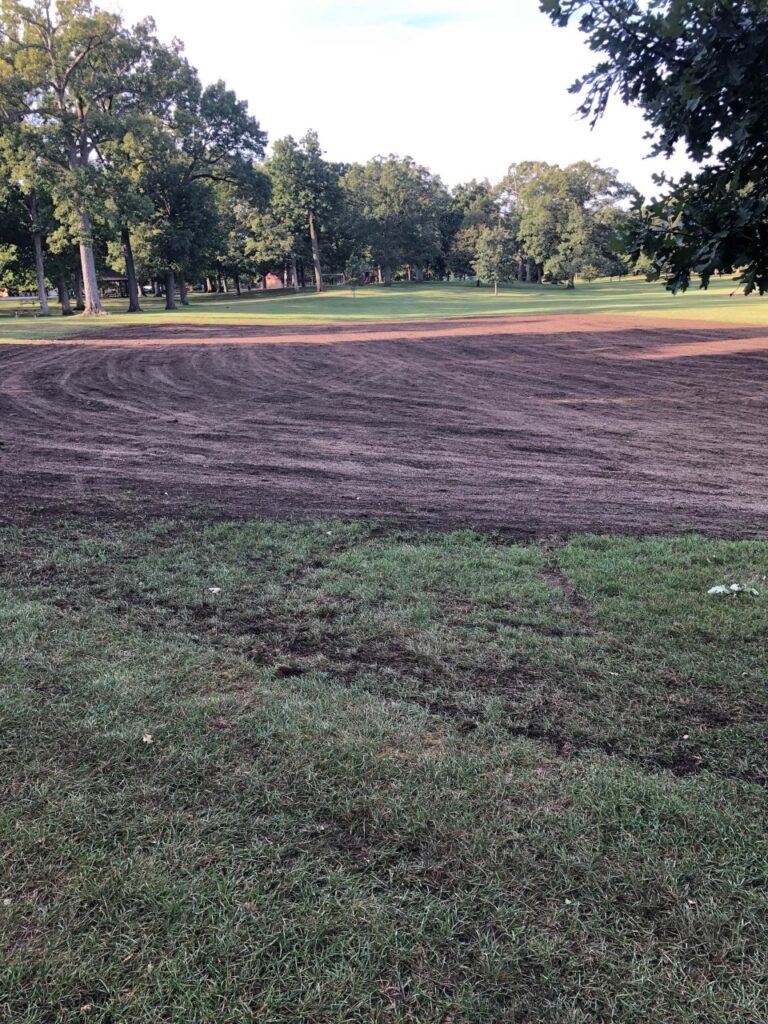 The city of Elgin seeded the topdressed area on the park and will monitor the seed growth through the remainder of the growing season.  MGG will continue to share images of this project on Facebook and Twitter! Help TAP support more park transitions away from pesticides by donating at bit.ly/MGGdonation. A generous donor will match your donation to MGG dollar for dollar from October 1st until the end of the year! 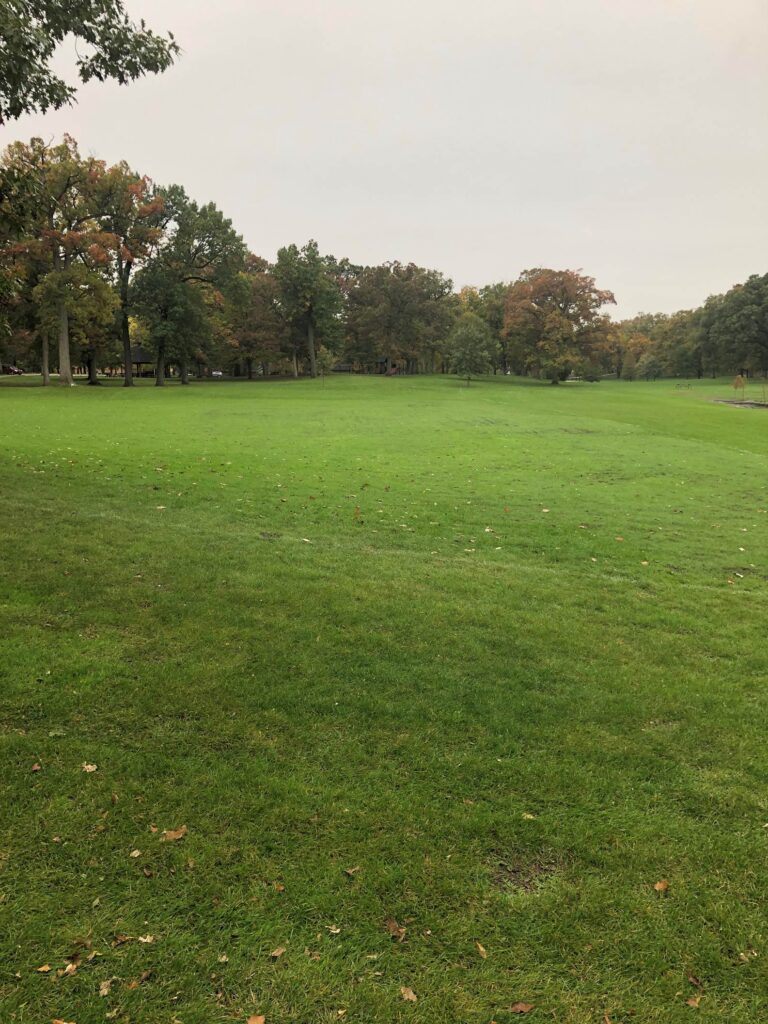